Article by The Sunday Times and Written by Alistair Dawber 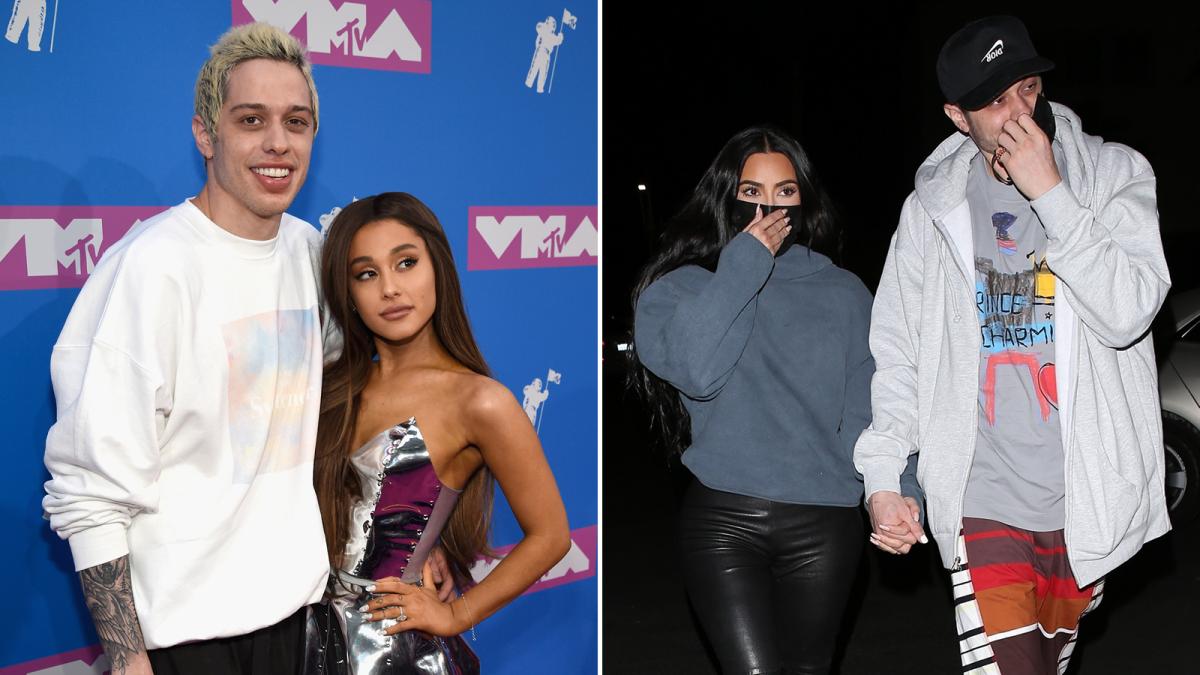 Pete Davidson had mayonnaise to sell and news to spread that could help him do it.

Sandwiched between pressing questions about his role in an advert for today’s Super Bowl and his thoughts on a particular brand of doughnuts came a moment when the comedian and actor deftly combined several viral ingredients to whip up a social media storm (and boost mayonnaise sales).

All he did was use the word “girlfriend” for the first time to describe his long-rumoured romantic partner — one of the most famous women in the world.

“I don’t have Instagram or Twitter or any of that stuff,” the 28-year-old star of Saturday Night Live told the presenter of People (The TV Show!) when she asked how fame affected him. “So, like, most of my daily life is getting into cars and showing up to a set. Or, if I’m off, I just either hang with my friends or chill with my girlfriend inside.”

Condiment marketing was not the only thing at stake here. Davidson — a heavily tattooed comedian from New York’s least glamorous borough, whose aesthetic appeal could most kindly be described as unconventional — had just cemented his status as Hollywood’s hottest Casanova.

He already had a string of famous exes, including the pop star Ariana Grande, Cindy Crawford’s model daughter, Kaia Gerber, and the British actresses Kate Beckinsale and Phoebe Dynevor, from Bridgerton. Now, by confirming his romance with the 41-year-old reality-TV star, billionaire entrepreneur and mother of four Kim Kardashian, Davidson had thrust himself to the top of the global A list.

“As long as his relationship with Kim continues to grow, he is going to go on a global tour with her, as her partner, that will expose him to a global audience that will fall in love with him,” said Evan Morgenstein, chief executive of CelebExperts, a celebrity booking service. Morgenstein worked as a motivational speaking agent for Kim’s stepfather, Bruce Jenner, for a decade, before Jenner transitioned to become Caitlyn. 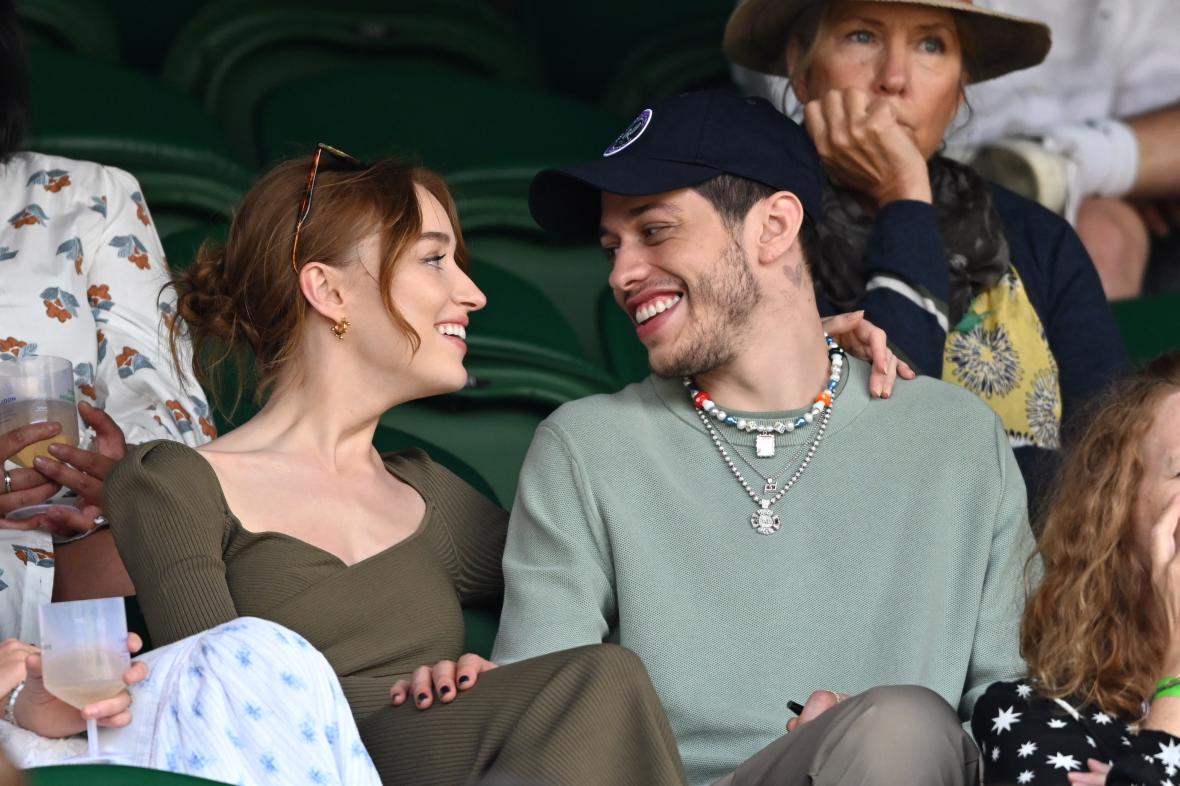 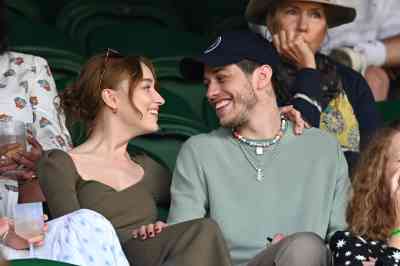 Taking in the tennis at Wimbledon with Phoebe Dynevor, one of the stars of BridgertonKARWAI TANG/GETTY IMAGES

“People are going to see him and see that he’s not a pompous ass. People are looking for that. That’s a hero, sadly to say. It’s the celebrity you can engage with — it’s where the market is.”

There is plenty more to keep dedicated celebrity-watchers interested. The Super Bowl ad shows that the comedian is able to laugh at himself, especially when millions of dollars are involved.

A picture of Davidson and Kardashian holding hands emerged in October, prompting Kanye West, whom the reality star is seeking to divorce after nearly seven years of marriage, to say that he wanted to “beat” his replacement for her affections. In the ad Davidson jokes that he is indeed “very hittable”.

As his stock rises, there are rumours in Hollywood that Davidson will be named as the host of next month’s Oscars ceremony.

“If he does the Oscars, Kanye is in the audience and he does a Kanye joke, he’s going to become the icon of all icons, that’s how it works,” said Morgenstein.

“All award shows are dying on the vine — TV numbers are historically low. If he’s there, and they start dropping stories that Kanye’s going to be there, it’s perhaps the highest ratings we’ve seen for ever.”

While having Kardashian on his arm is no doubt good for his career, Davidson is a star in his own right, especially in America.

In 2014 he joined the cast of Saturday Night Live, one of America’s best-loved shows, at the age of 20. Two years ago his compelling past became the focus of a semi-autobiographical film, The King of Staten Island, which he co-wrote and starred in.

He has spoken in the past about his mental health struggles and his periodically heavy use of marijuana to cope with Crohn’s disease, which he has had since he was about 17. In December 2018 he was contacted by New York police after posting on Instagram that he was contemplating suicide, an episode that led to him leaving the platform. 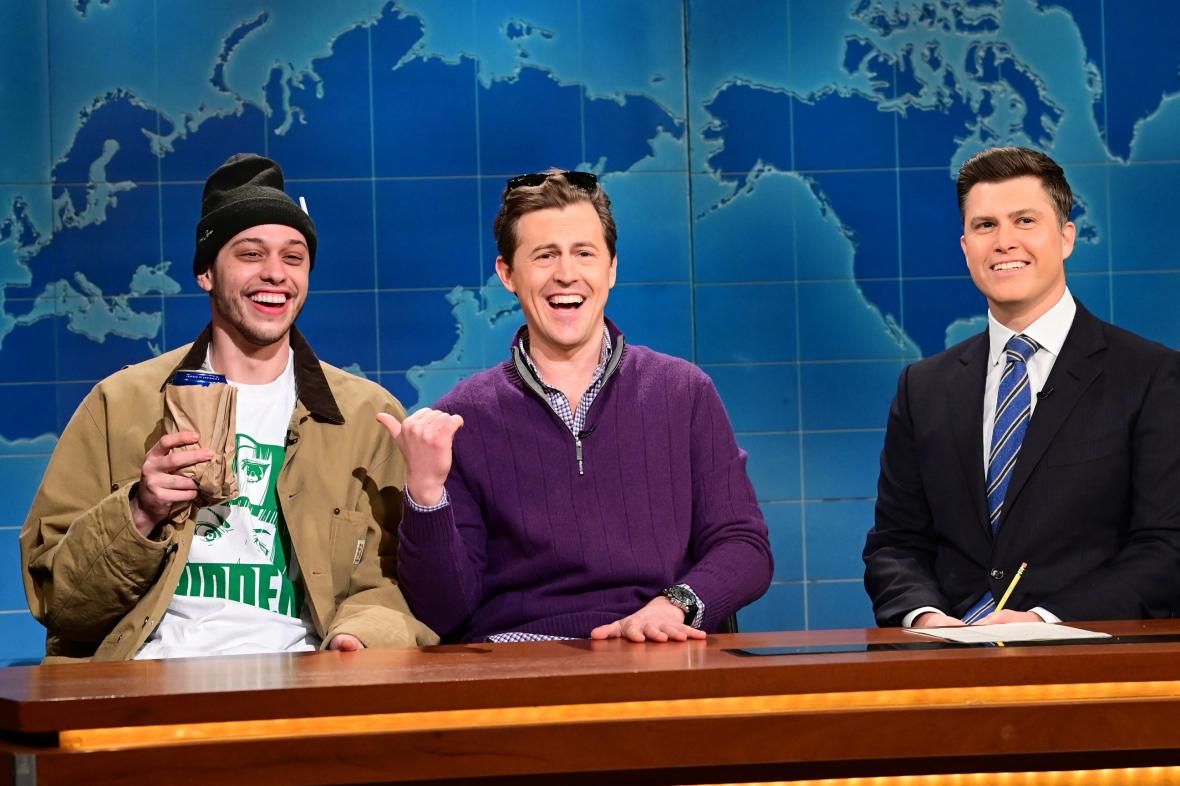 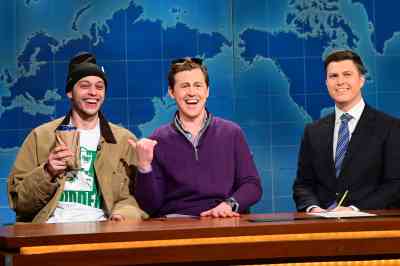 Davidson, left, joined the cast of Saturday Night Live at the age of 20WILL HEATH/NBC/GETTY IMAGES

Until recently he lived with his mother in New York. His father, a fireman, was killed in the World Trade Centerf attacks on September 11, 2001, when Davidson was seven. He has his father’s firefighter’s badge number, 8418, tattooed on his left arm.

He also has a tattoo of Hillary Clinton, who acknowledged his fame and influence in 2017 when she joked, “This makes it significantly less awkward that I’ve had a Pete Davidson tattoo for years.”

Davidson is funny, largely self-deprecating and often acerbic. Sometimes his comedy has landed him in hot water.

The joke tanked, he received death threats and a week later Davidson publicly apologised to Crenshaw.

Often, though, he has shown surer judgment.

When asked on Saturday Night Live in 2019 about the 20-year age gap between him and Beckinsale, Davidson did himself no harm in pointing to the number of famous men who have much younger partners.

“Apparently people have a crazy fascination with our age difference,” he said. 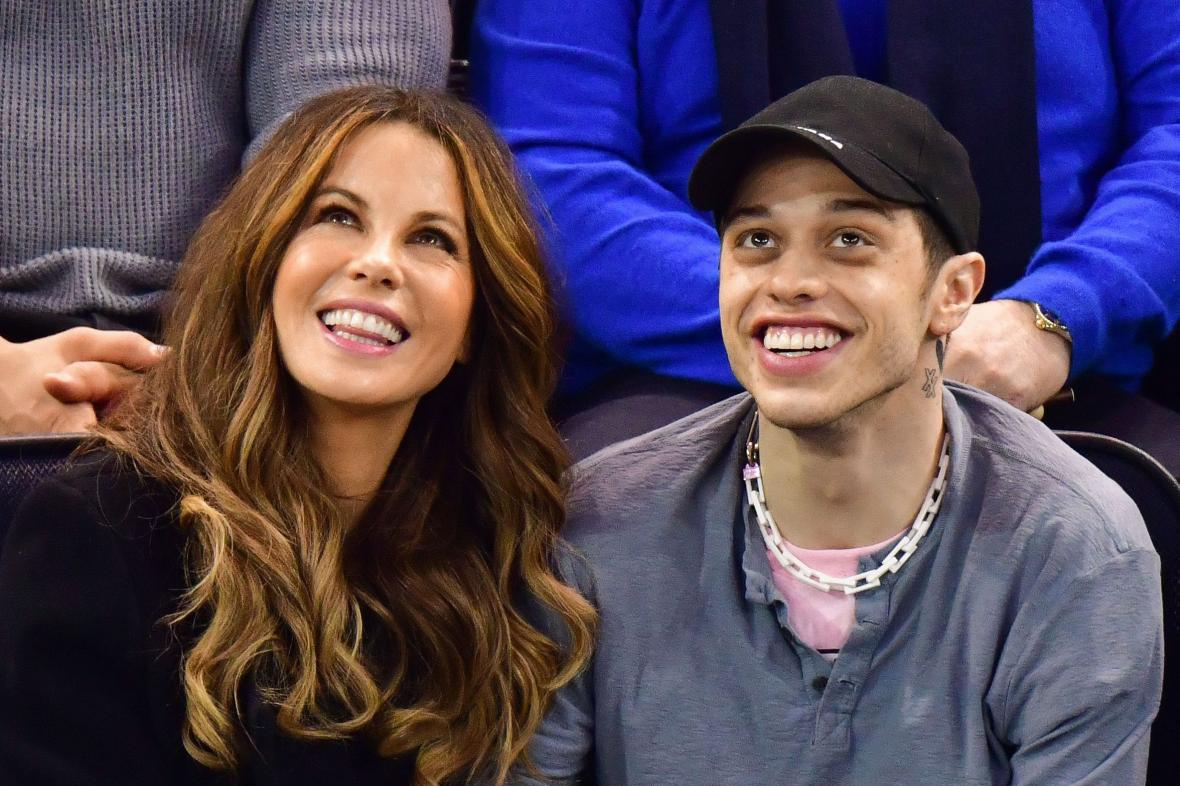 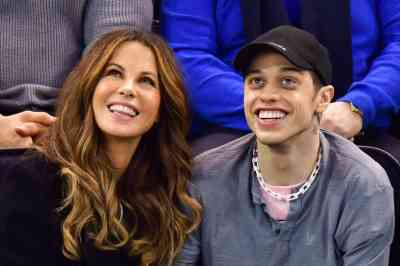 Those who have watched his progress say Davidson has navigated the journey to tabloid notoriety without losing touch with his roots in Staten Island, a solidly working-class area of New York. But it was his former fiancée Ariana Grande who perhaps did most for his reputation. Until then, the rest of the world could have been forgiven for assuming that it was Davidson’s wit, charm and sense of humour that had persuaded so many famous women to date him.

A now deleted tweet from Grande revealed another possibility, with the singer apparently blurting out that her former beau was rather generously endowed. “I think she’s just tiny,” shrugged Davidson when the inevitable questions followed (Grande is just over 5ft tall). “I think I have an average-sized penis and she’s tiny. Everything’s big to her.”